So I finally got a chance to play through 2 rounds of Song of Blades and Heroes with a buddy last night.  We definitely had a good time playing and that is solely based on it’s simplicity.  We were able to use the Warband Builder tool provided by Ganesha Games on their site to create some units for our use.  For our fight we decided to use my Warhammer Bretonnian’s as Humans against his Hordes Trollbloods as Trolls + some custom fun.  Using the basic troll stats in the book and adjusting them with the Warband Builder we were able to create an entire Troll Warband quickly and get a game going.

This has such a large appeal based on the fact that we can custom tailor this rule set to fit the miniatures we put on the table. Among the group of people I play games with, some play Warmachine/Hordes, some play Warhammer, some play Mordheim, etc etc. The fact that this simple fantasy rule set breaks down the wall and is fun to play might just open a whole new era in miniature gaming for myself and fellow gamers. 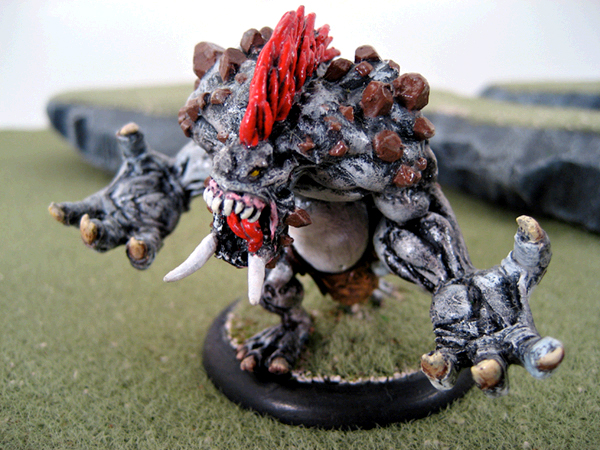 The rules do eschew from the normal miniature rule standards when it comes to movement and measurement, it breaks down all lengths into 3 sections, short, medium, and long.  A rough translation of MM to IN gets us 3, 5 and 7 inches respectively.  It’s not that this is a bad thing, it’s just very much different than before, and it changes how you move about the board compared to any other miniature game I’ve played.  The reality for us is that this rule set might allow us to use it with a fairly complex campaign system allowing for growth in both warband list and in terms of land grabbing via a Mighty Empires map based system.  Right now the rules are starting to come together and ideas are definitely flowing.

The one main point I wanted to bring up, and the main reason for this post really, is to explain something that doesn’t happen often.  I don’t often see a rule set where I can play the game and not have to worry about this ruling or that ruling, or a FAQ, or forum posts to clarify / pass judgment based on what was written.  This is a huge thing for me, I want to worry less about the rules and more about the fun, the game, and the experience of getting beaten and losing my territory or beating out, in a grand seige, a friend to take hold of his kingdom…..I’m hoping this might work to my favor!